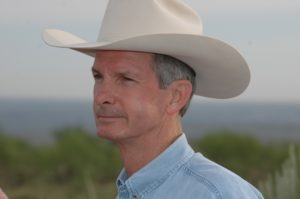 Ken is President of Cornerstone Ranching Solutions, LLC. He is a retired Extension Wildlife Specialist, having worked with Texas A&M AgriLife Research and Texas A&M AgriLife Extension Service.  He retired in 2014 after 21 years of service with the A&M System.  Based in Amarillo, and with extensive statewide experience, he most recently provided wildlife related land management educational programs for adults and youth in the High Plains and Trans-Pecos regions. Ken began work with the agency in 1998, also serving the Rolling Plains and Trans-Pecos regions as Wildlife Research Associate from 1998 to 2004. He previously taught at Sul Ross State University in Alpine, has worked for ranches in the Edwards Plateau and the Trans-Pecos, was a rancher and wildlife manager in Kendall, Kerr, and Bandera counties for 14 years, and was  involved previously in research projects related to management of predation on livestock, and deer and brush management interactions. He has been a Certified Wildlife Biologist since 1989. His interests include all aspects of ranch operation, especially incorporating wildlife management into traditional ranching and farming activities.

Ken earned an MS in Range Animal Science from Sul Ross State University in 1996 and a BS in Wildlife and Fisheries Sciences from Texas A&M University in 1976. His studies concentrated on wildlife science, range science, soil science, farm animal physiology, animal reproduction, forest science, pasture management, wildlife diseases, and wildlife management techniques. He has an Artificial Insemination Certificate from Medina Valley A.I. School that he earned in 1984. Ken is a member of Texas and Southwestern Cattle Raisers Association, Society for Range Management, Texas Section Society for Range Management, Texas Wildlife Association, The Wildlife Society, and Texas Chapter The Wildlife Society. He is a Director and Region Chair for Texas Wildlife Association, Past President (2012) of the Texas Section Society for Range Management, former Secretary for Texas Chapter The Wildlife Society, and Past President of Texas Brigades youth wildlife leadership camps.

"Unless the LORD builds the house, they labor in vain who build it." Psalm 127:1a